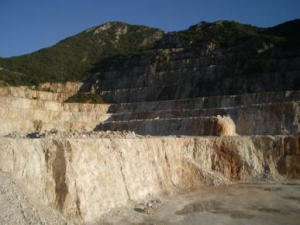 The study was aimed at developing a rapid test for the characterization of the excavated rock in a limestone quarry (San Carlo quarry) before the industrial processing. The limestone is quarried to produce the Solvay soda ash (Rosignano industrial plant) and, after crushing, it is calcined (950 – 1100°C) inside the lime kilns of the plant. In the quarry, the rock looks homogeneous, but it shows a variable behaviour inside the lime kilns; in particular, some crushed limestone pieces, very sensitive to thermal effects, show bad mechanical performance in the industrial process and this rock should be previously discarded in order to avoid economic losses. Indeed, its presence in the kilns requires halting the production with economic losses estimated as approximately 1 M€/day.

Development of a rapid mechanical test:

Design of an innovative mechanical test which can be performed in the quarry on irregular samples, reliable and able to characterize the quarried rock more quickly and at lower cost than the test traditionally adopted (Schmidt test). 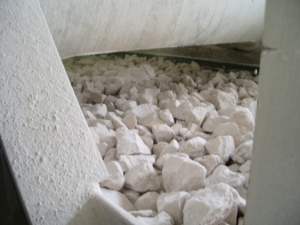 Crushed rock inside the lime kilns. 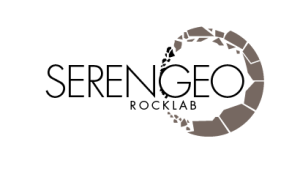